Now look in the data dictionary to get the actual sizes of the two new materialized views.

Which raises the question: Oracle tells you what they are. A materialized view is a database object that contains the results of a query.

The FROM clause of the query can name tables, views, and other materialized views. Collectively these objects are called master tables a replication term or detail tables a data warehousing term.

When you execute a query that matches a martieralized view query Oracle can often determined using query rewrite that the actual MV table already contains the data needed. If the MV query is just a simple query on a single table that doesn't really save much.

But an MV query can be a complex query on multiple tables and contain aggregate operators. You can also query the MV table directly. So MVs are often used as report-ready tables.Is this because I cannot use query rewrite in XE? 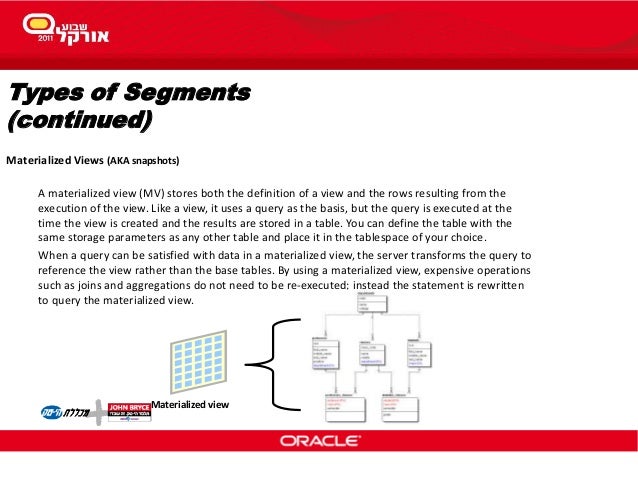 Cassandra is optimized for writes and you will only get happy when you're using the cassandra features. Some performance tips: If you need a better consistency: Use QUORUM, never use ALL.

And, generally, write you queries standalone. MATERIALIZED VIEW VS query with ALLOW. Simultaneouly whenever I am using a query which is same as the query used in materialized view having query rewrite enabled, the query is not using the materialized view.I found it through plan table.

Please suggest. Is it good idea to create Materialized Views on complex query?

Please advice. Thanks SELECT. Oracle can do that with its materialized views like you mentioned, but only if that materialized view has query rewrite enabled and the view is not stale. But my article attempts to compares SQL Server tables (as described) to Oracle’s stale materialized views That they’re more or less equivalent.

I’ll repeat the last sentence of.

oracle11g - How to use Oracle DBMS_ADVANCED_REWRITE with bind variable? - Stack Overflow